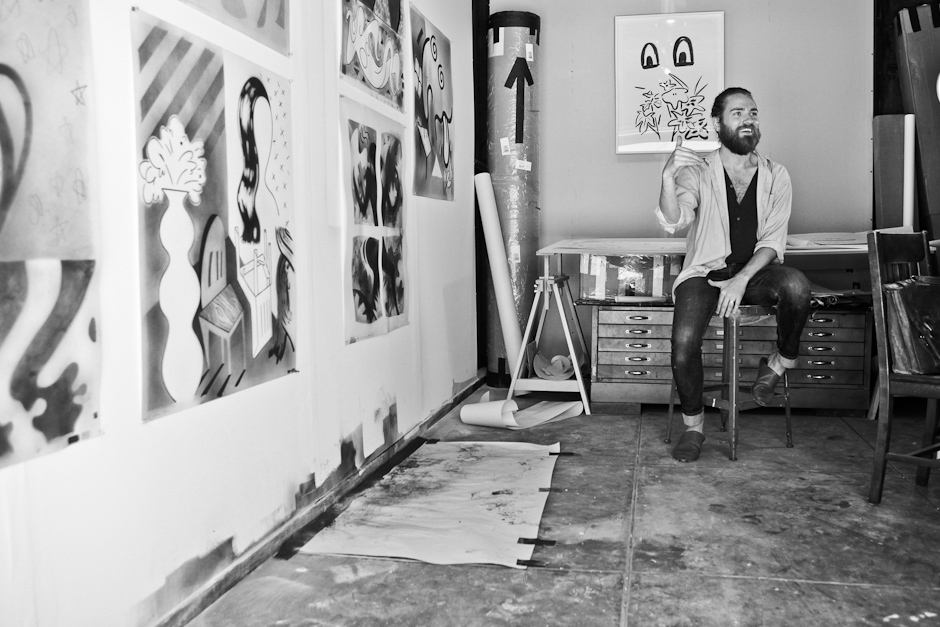 “Being human is such a strange thing, and in my work I’m trying to get at that. Debasement or destabilizing is also key… kind of ruining the image… it’s important to me to bring that into my work, to fuck with this imagery in a funny way.”

I’ve always thought that life was a jumble; a chaotic collection of accidental encounters, burning desires, missteps and failures, booming heartaches, swift changes, and unpredictable outcomes… but I have also always believed in invisible connections and miraculous timing, which often bring things together in such a way that it makes it hard to deny that there is magic in the world. This everyday tumult, along with life’s unexpected flashes of mystery and wonder is effectively rendered in Brian Scott Campbell’s graphite and charcoal drawings. Campbell’s works present landscapes and interior spaces as lived experiences— though still concerned with spatial proportions and architectural symmetry, he is more interested in revealing the way in which spaces are lived in and intimately known. Campbell’s spaces read like dreams— logic and absurdity, the bizarre and familiar, elegance and crudeness all converge to create a disorientating, but thrilling experience for the viewer. There is so much to readily see and feel, but much like dreams the significance of each element is difficult to decipher; meaning is muddled, hidden and warped in the cartoonish lines and forms that populate the drawings, leaving the viewer to interpret on their own. Campbell’s work conjures up an eerie world, full of nostalgia and dismay, but it is also riddled with a certain comedic lightness— in his juxtapositions there seems to be a “wink wink” hinting at inside jokes we might never completely know, and his wacky, 80s aesthetic is reminiscent of a child’s runaway imagination. 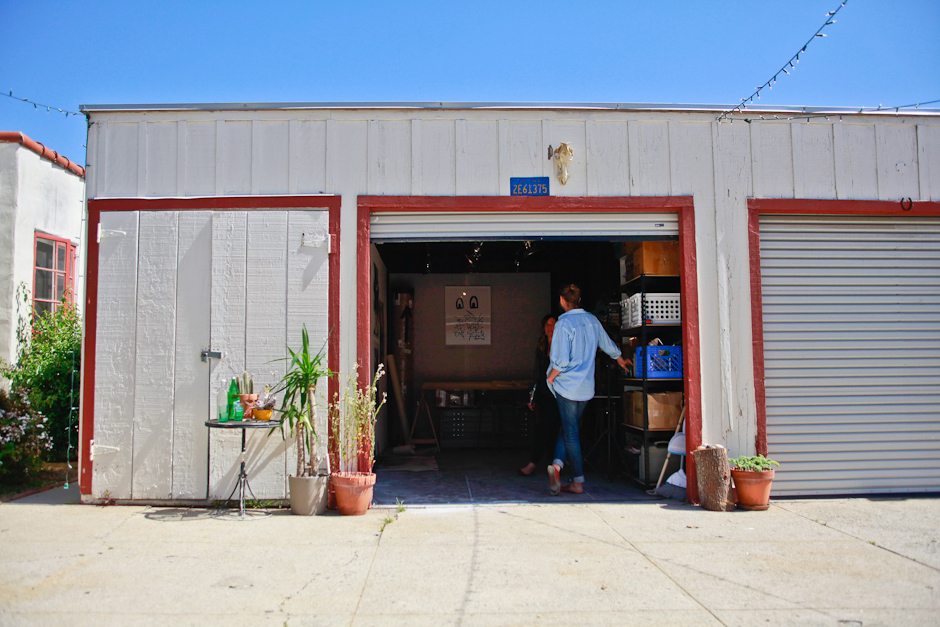 While talking with Brian at his Santa Barbara studio, just steps away from his home, he told us that he mother had been a clown and that as a child he worked as her assistant and frequently visited children’s birthday parties. Somehow this bit of information has really stuck with me— I suppose it’s because within the context of the arts, clowns or the figure of the fool function not just as comic relief but also enable accessibility to difficult subject matter. The clown, unlike other characters, can more easily step outside the confines of expected behavior to address complex ideas with honesty and irreverence. I think Brian’s clown assistantship has served him well… as he has managed to bring an undeniable humor and irreverence to his work without marring the integrity of it. 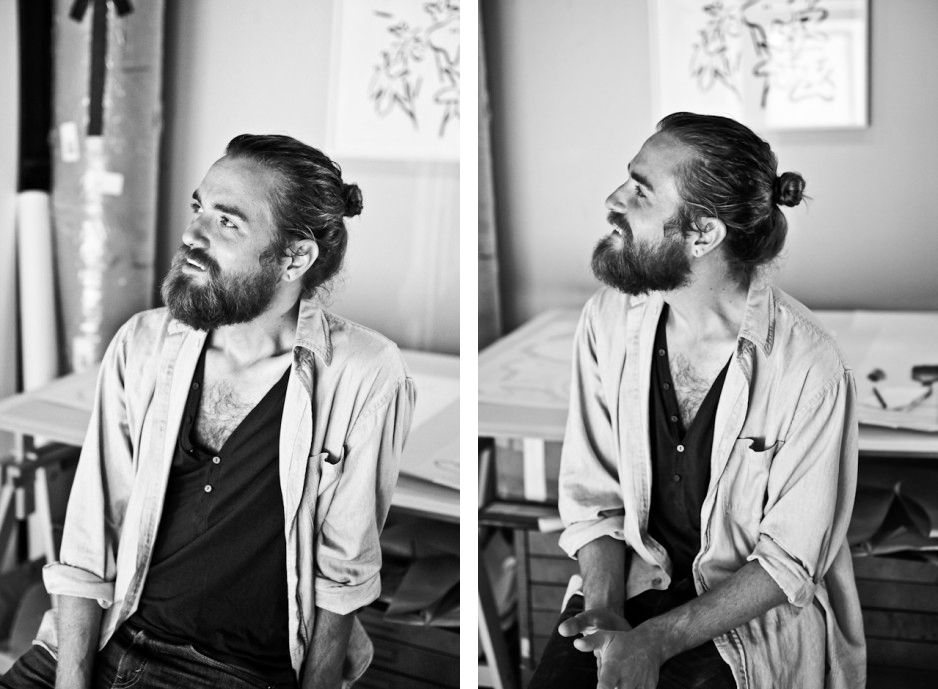 How would you describe your subject matter or the content of your work?
I think of my drawings as a claustrophobic space where the anticipation of collapse coexists with an electric energy. The graphite and ink drawings on paper are at once exuberant and sober. The work is a reflection on contemporary life through modern forms and classical iconography. Skewed still-life subjects, languorous figuration, and cartoons are combined to a kaleidoscopic effect. The work oscillates between surrealism and pop, and describes a kind of hypnotic conflict of surface.

I’m seeing a lot of changes happening in my work lately, so I should say that the 2010/11 work dealt much more with landscape/interiors. These were often absent of human trace, so it became an idea to incorporate figures, but in a covert way. In the most recent work, modern forms are given a contemporary context. 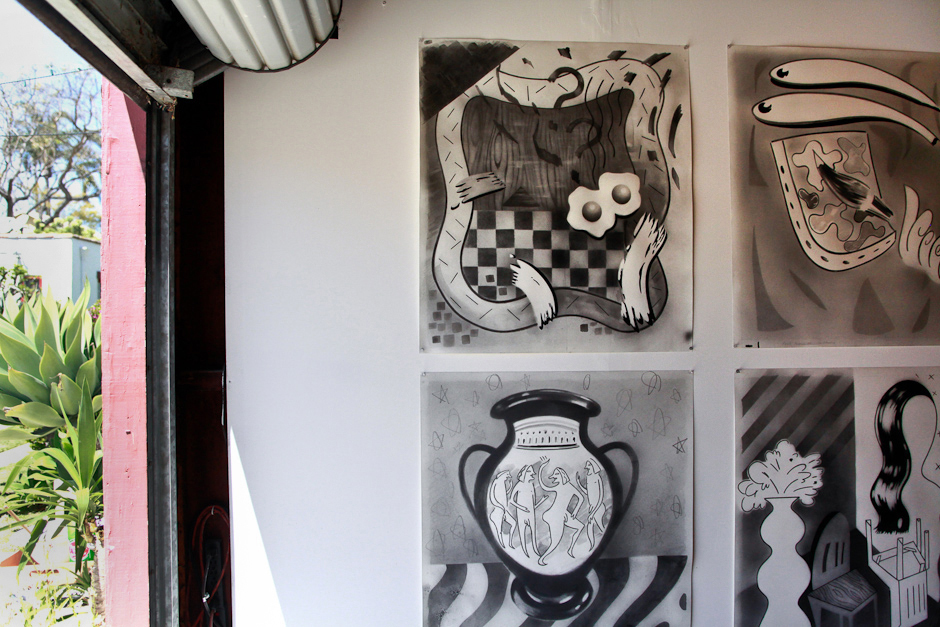 The images I find myself thinking about the most have an element of surprise or absurdity. Maybe this is because being human is such a strange thing, and in my work I’m trying to get at that. Debasement or destabilizing is also key… kind of ruining the image. Our everyday landscapes and interior spaces are not pristine, even if they are often rendered so in popular media, so it’s important to me to bring that into my work, to fuck with this imagery in a funny way.

What mediums do you work with?
Graphite washes, pencil, ink and graphite sprays, gouache, and sometimes charcoal on paper.

Your work is like a collective scrapbook or dream diary; so many elements collapse together, yet still there seems to be a story. Can you tell us more about this narrative quality?
Yes, it’s almost like a black hole for contemporary life. I relate these to a film montage or a surrealist collage. In fact, my process in the past included a fair amount of source gathering and collaging before starting a drawing. For the moment, I’ve eliminated that from my process in favor of an immediate approach. All of my 2013 work was created with very little preparatory sketching. All of the work is done on the surface. But more to the point, the narratives are arrived at through a series of semantic games and prose writing. These are often very short, and can lead to a title, or perhaps the imagery in the drawing. My sketchbooks are very scattered and freewheeling— they might include grocery lists, a poem, some bizarre idea not connected to my work, or a funny sketch… These elements interfere with the plans for my drawings, which I suppose explains how a drawing of a snowman could be juxtaposed with a nude, vase, and pipe. All of this has kind of become one thing to me. It started out so naturally, but now my sketchbook has become more purposeful in that I do see it as an entry point into the drawing.

Lyrics to songs can also find their way into this process. I don’t want to be too didactic about where these narratives lead the viewer, but I’m often preoccupied with anxious or awkward space, the possibility of magic and memory, ghosts, etc. The portraits loom large within the space. They’re enlarged, yet reduced down to an idea of a face, rather than a truly persuasive identity. At the very least, this imagery reminds me of my own longings, insecurities, and identity as an artist.

Does personal history work its way into your practice? How might who you are be reflected in your current work?
It does, albeit subconsciously. Eventually everything gets absorbed into the bloodstream. I was raised very catholic, in the suburbs, away from museums. Although, most of my family were from Pittsburg, PA, and had much more of an immigrant experience, including polish bread and saints. My mother was a professional clown, and I grew up going to children’s birthday parties as her assistant, entertaining and painting kids faces. Looking back, I realize that this is a bit strange, but I loved it. The clowning doesn’t seem to square with the somber tones of a very religious family. I lived a very typical mid-western teenage existence, otherwise. I watched cartoons and didn’t go outside very often. Some of that has entered in to my practice. 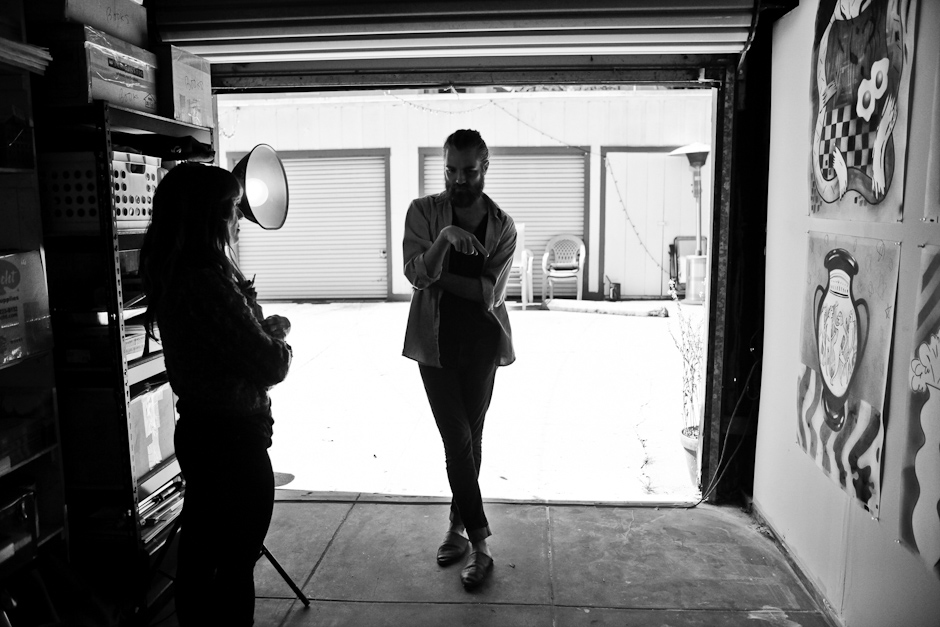 What are you presently inspired by— are there particular things you are reading, listening to or looking at to fuel your work?
I’m looking at Matisse, Picasso, Picabia, Guston, Robert Colescott, Jim Nutt, Ed Pashke, Marsden Hartley, Peter Saul, and so many contemporary artists, and friends of mine. I love to see what my friends are making. I’m fairly sure that I’m the only fan of both psychedelic folk music and professional football. Lately, I can’t stop listening to Dug Dug’s, Henry Cow, Gong, and Ya Ho Wa 13. I usually set aside a few minutes every Saturday to listen to the Void/Faith split LP. I just started reading Honore de Balzac’s “Old Man Goriot.” I hear that Balzac is hilarious!

Is there something you are currently working on, or are excited about starting that you can tell us about?
I’m very excited about this current body of work! I’m eager to see where they lead me. The recent work is approximately 32 x28″. In the past, I’ve made some very large-scale drawings, so right now I’m happy to create a body of work at this medium-scale. Although, I’m planning a piece for 2014 entitled, “Night Picnic”, which will be approximately ten feet wide. 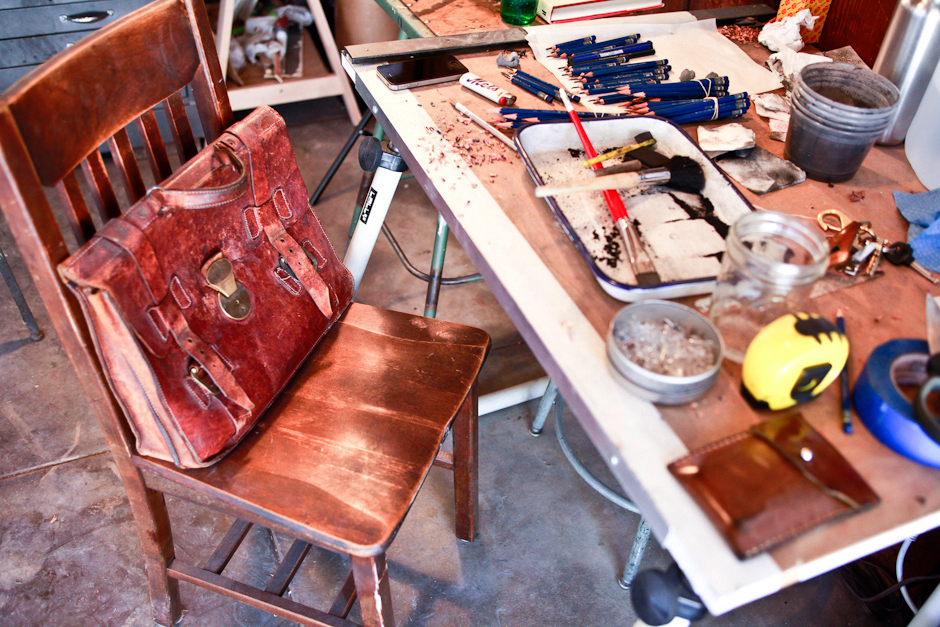 Other than your art practice what other work do you do?
I’m an Assistant Professor in Drawing at Santa Barbara City College.

You moved fairly recently from Brooklyn to Santa Barbara—how has the move affected or informed your work?
I take a lot of comfort in knowing that John Waters lives in a town about two miles from me. Everyone here is competing to relax and enjoy the sun more than the next person. My favorite thing to see here are the RV guys that just want to be close to the beach, paint their vans, or glue toys to the roof of their VW bus. There is a local guy that makes sand sculptures of mermaids and sets up little games by the wharf. It’s very inspiring. Ha! I think it’s difficult to say how my work will change. My new work is probably informed just as strongly from my time in NYC, and my studio practice there, as it is by the new surroundings in California.

How do you navigate the art world?
I try to surround myself with and work with good people. So far, I’ve been really lucky. Bob Nickas said, “You cannot exhibit a work of art without a reason.” I try to keep that idea in mind in my efforts to contribute to the dialogue about contemporary drawing and painting. Often an effort to participate can be seen as vulgar or uncool. Scarcity is a huge part of the artworld; value is often placed on elusiveness, preciousness and inaccessibility. I guess that’s why it’s so refreshing when artists are community members, and make their work in earnest without a thought about the market. My blog has also been a nice way to connect with other artists and promote things that I think about or care about.

Do you have a motto?
J Mascis says that writing songs is like fishing; you just have to show up and wait. Making art is like this, I think. You just have to catch a lot of small fish, and put the time in. Keith Haring once said about drawing, “…it is still basically the same as it has been since prehistory. It brings together man and the world. It lives through magic.”

Are you involved in any upcoming shows or events? Where and when?
I just finished up two group shows in New York at Jeff Bailey Gallery and at Ortega Y Gasset Projects. I have an upcoming show with Jamian Juliano-Villani and Erik Schoonebeek at David Shelton Gallery in Houston Texas, and a group drawing show at CB1 in Los Angeles. 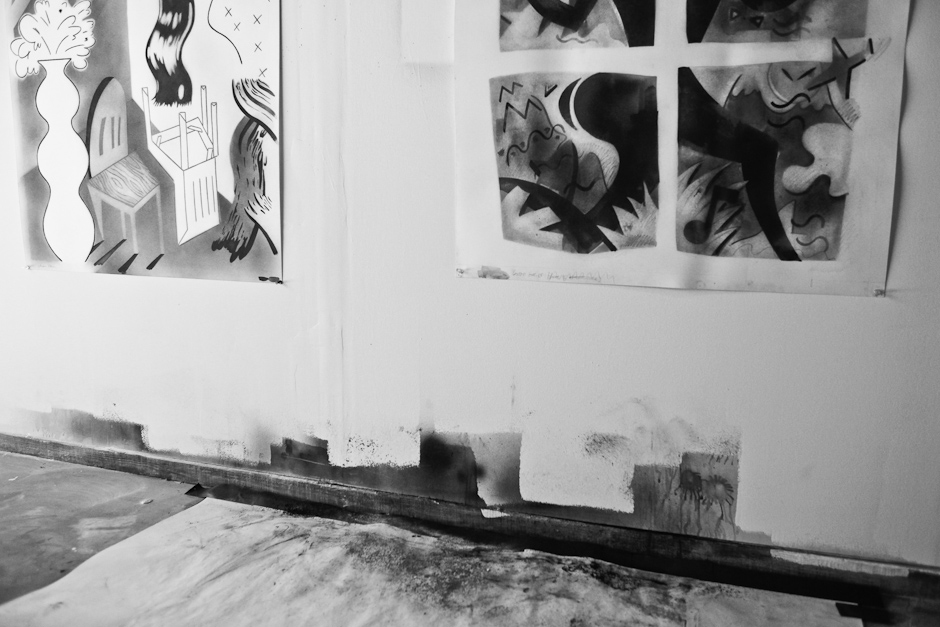